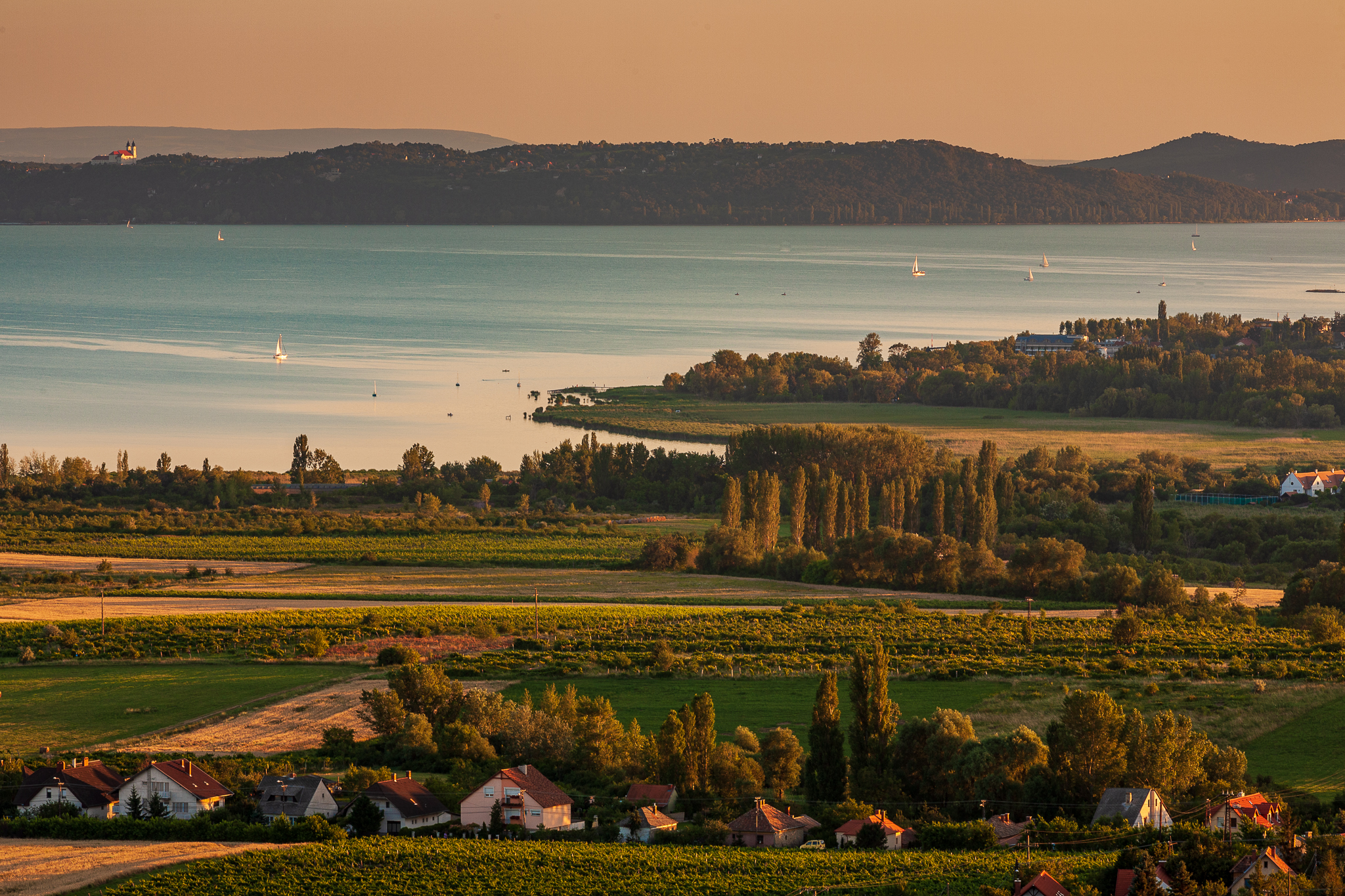 The warm breeze ruffled the yellowing leaves of the grapevines and the August sun beat down on the grey tiled terrace. Shelter from the burning rays was provided by a makeshift blind: an old khaki tarpaulin suspended from the beams that held up the terrace roof and tied to poles rising up from the hard ground below. Under this was a semi-shade, but still the heat was dry and enveloping. Past the vines that drifted down the gentle slope rose bushes and trees, interspersed by the red tiles of isolated houses, and beyond this, just before the horizon itself, lay the lake, its normal turquoise magnified by the bleached blue of the sky above. 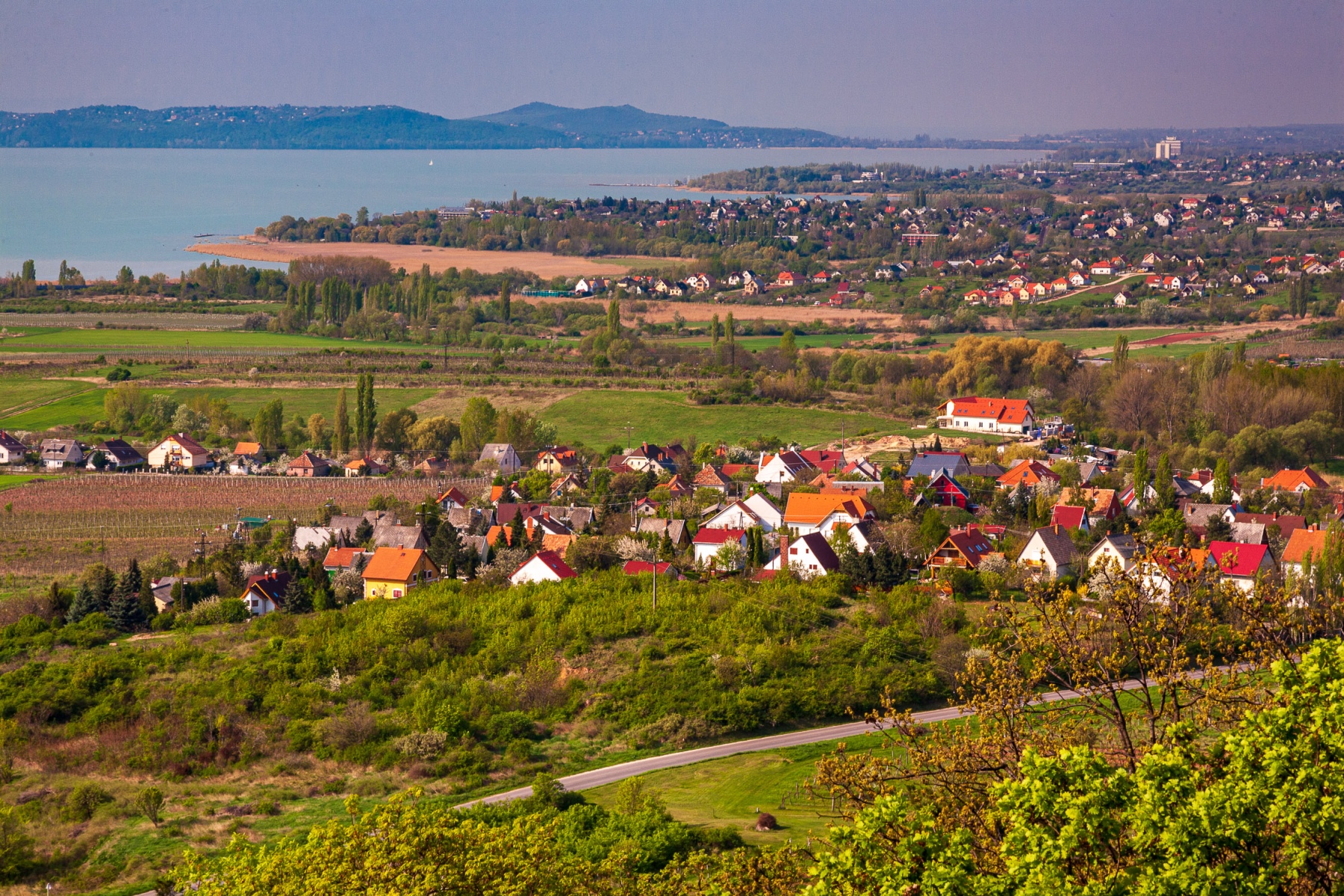 Everyone has their own mental image of the perfect scene. I can think of several, each jumping to the fore depending on what mood I might be in, but at this time, on this day, I could think of nowhere better than this vista, viewed from the terrace of a house on the slopes above the village of Alsóörs on the northern side of Lake Balaton, Hungary. There is an advantage to having relatives in this part of Central Europe: how else would this view have been so freely available? How else would I have been able to spend the day sitting, drinking homemade white wine from the cellar beneath the house whilst drinking in what must surely be one of the best views in Europe. 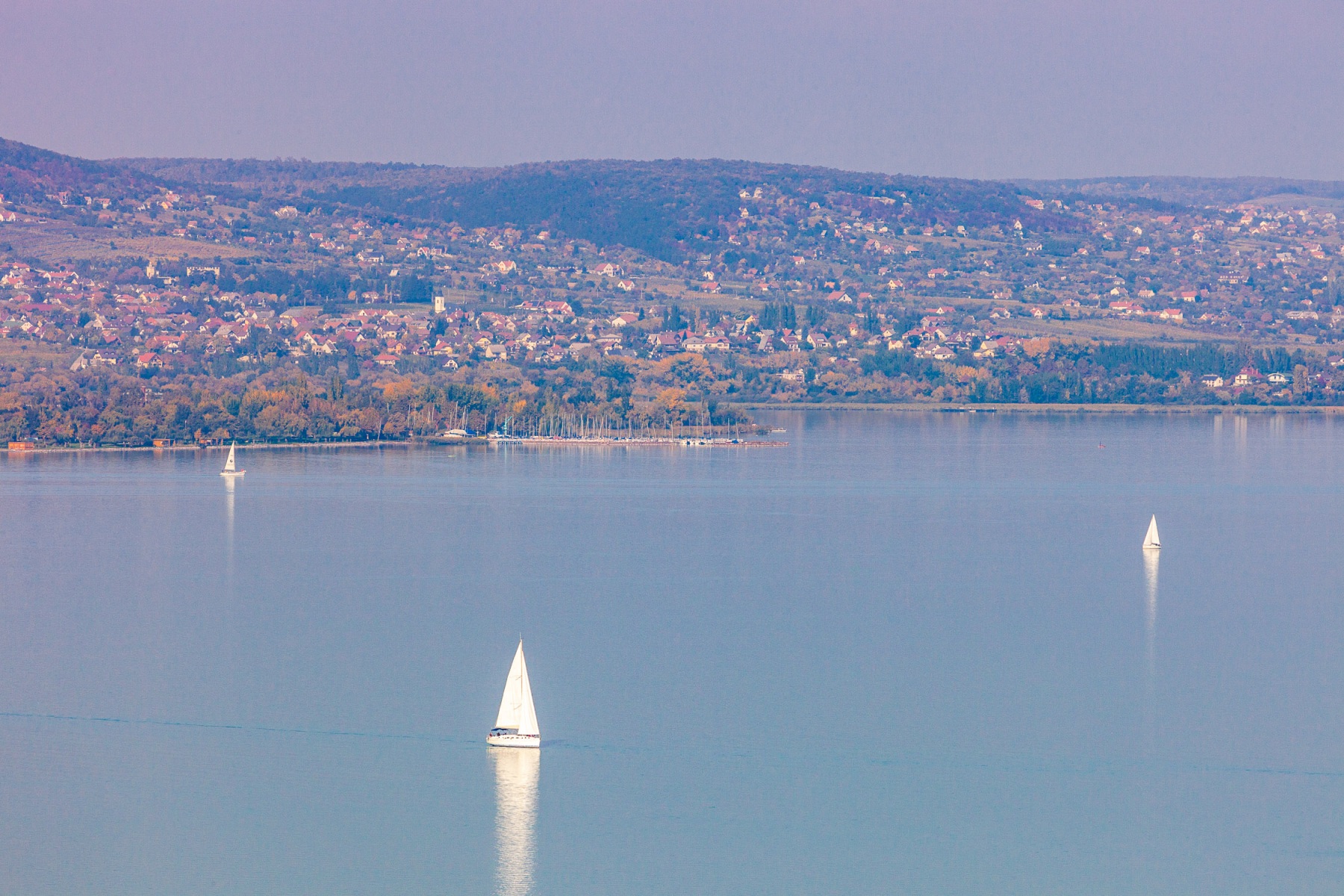 Balaton is Central Europe’s largest lake, 48 miles long and just under 9 miles wide, cutting a blue scar into a map of Hungary to the southwest of Budapest. To the Hungarian people though, Balaton is more than just a body of freshwater, it is a potent symbol of national identity, the main centre of summer activities and part of a multitude of interwoven personal histories. It is on the shores of the lake that countless generations have met, fallen in love, spent their summers and in many cases retired. It is where much of the nation still comes for summer holidays, the south shore built up with hotels and resorts, the north shore too, though to a lesser extent due to the volcanic and heavily wooded hills that tumble almost to the lake itself and which form part of the Balaton Uplands National Park. The ridge formed by these hills runs parallel with the lake, separating the north shore from the regional capital at Veszprém, and reaches its most spectacular at the basalt mounds at Badacsony. 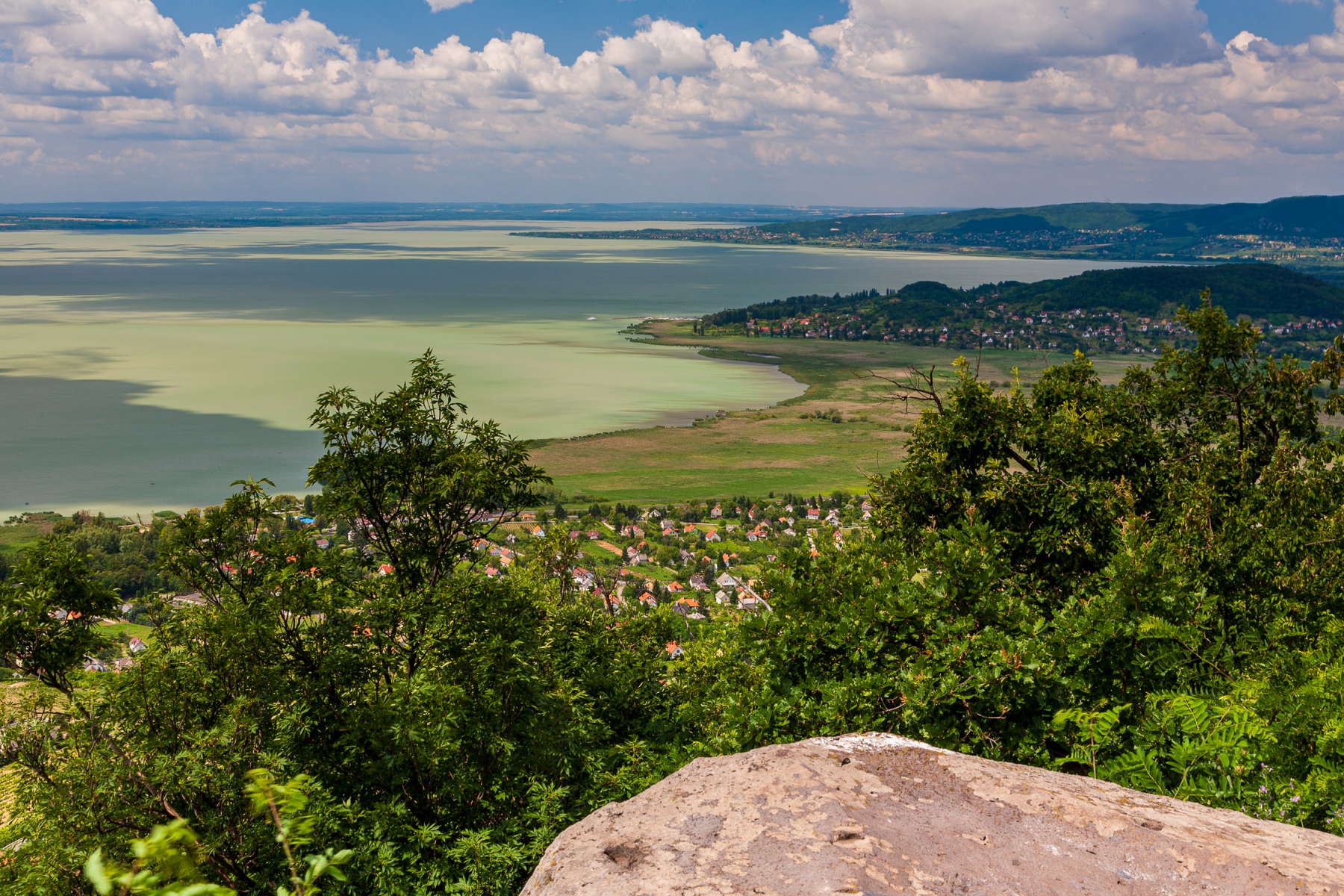 Tourists first arrived here with the coming of the railways towards the end of the 19th century, with many coming to bathe and take the waters in the spa town of Balatonfüred and other small towns. The heyday of tourism though, was the 1960s and 70s when the powerful unions of the Socialist regime organised wholesale subsidised stays for their members in the burgeoning towns of Siófok, Balatonalmádi, Keszthely and Zamárdi. These towns still feature the concrete developments of these times. As well as Hungarians, Balaton was also popular with other holidaymakers within the Eastern Bloc, particularly East Germans, for whom the Lake offered the unique chance to meet up with family and friends from the West, normally kept at arms length by the physical and idealogical divide of the Berlin Wall. As Communism fell and Europe opened up, the subsidised holidays ended, but Balaton remained a destination of escape for the inhabitants of Hungary’s ever growing capital, Budapest, and the dusty plains to the east. It retained its popularity with the now unified Germans as well. They still come every summer to its campsites, hotels and grassy “beaches” and are well catered for with German almost the second language of the area. 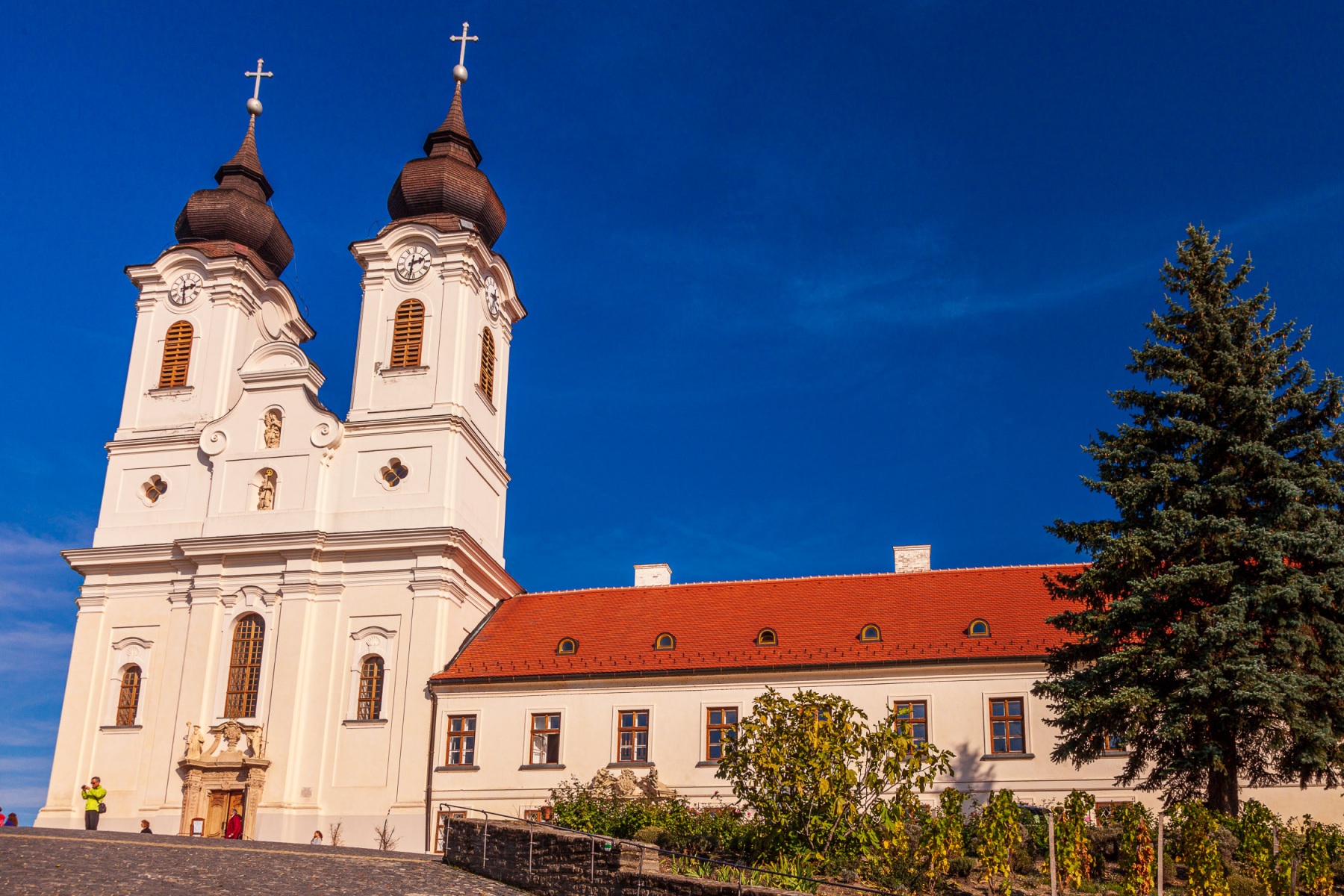 Of course, there is more to the region than tourism. Though the resorts and holiday services have shaped the towns of the lake shores, scattered throughout are picturesque villages, architectural gems and patches of history. Nowhere is this more concentrated than on the Tihany Peninsula. Here on this headland that almost cuts Balaton in two, Tihany Abbey dominates the village of the same name with its historical housing and encompassing views. Though popular with visitors, the narrow streets and paths that climb down the hillsides to the lake shore mean the area retains a unique charm and sense of isolation from the rest of the area, and the variety of landscapes from limestone hills to lakeside wetlands provides a place to while away a day in exploration. Just to the north, Veszprém’s castle district is an architectural delight, its historic buildings lining the cobbled street that climbs Castle Hill to a spectacular viewpoint over the surrounding landscape. There is a real sense of Hungarian history here. It was near here that Stephen I defeated the enemies of his attempts to bring Christianity to the country, playing a pivotal role in the creation of the Hungarian national identity. The city was also often the front-line in the long-fought struggle between the Habsburg and Ottoman Empires, changing hands several times before finally finding stability as the Austro-Hungarian Empire settled into relative peace and prosperity. 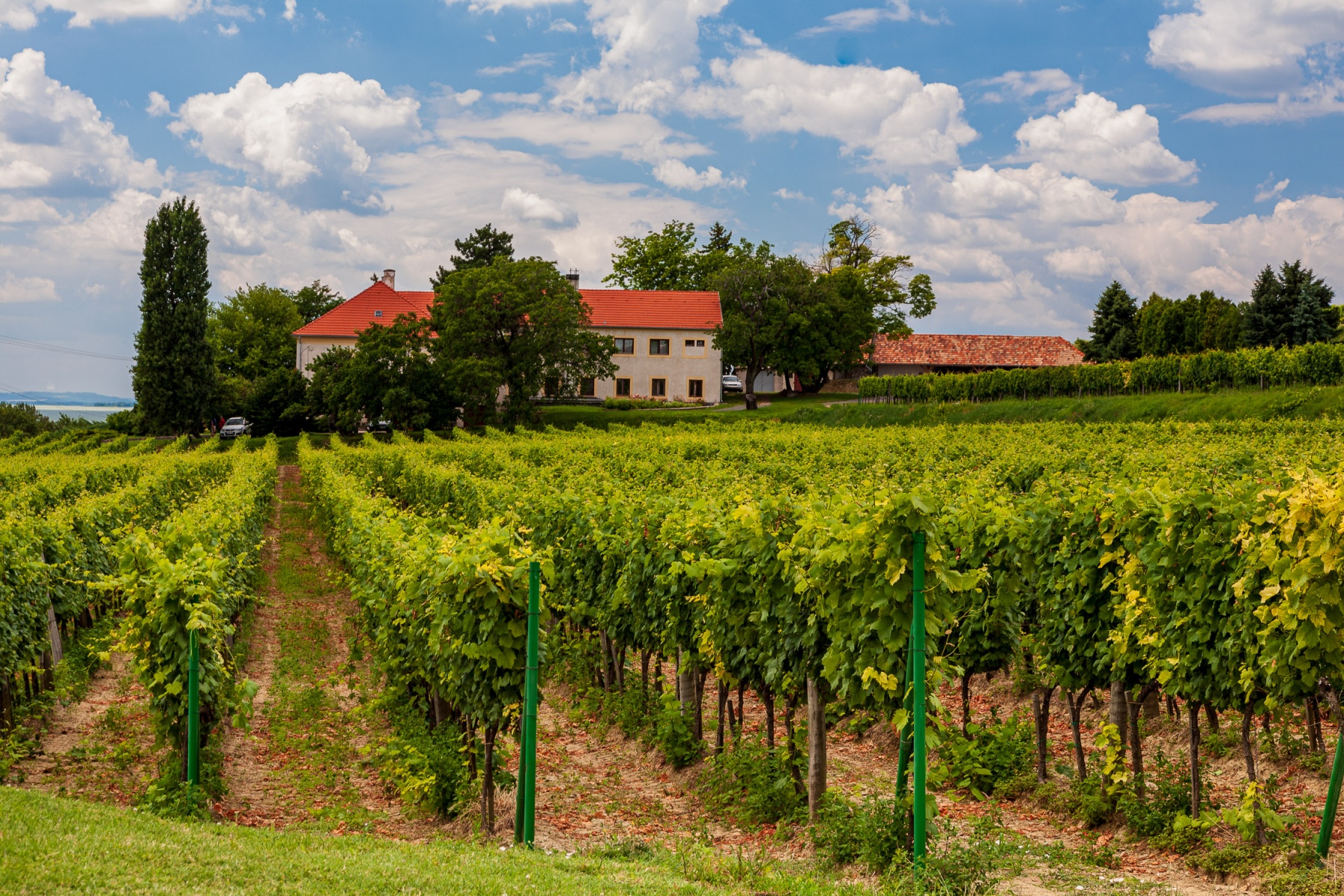 This is also prime wine country, one of the most productive in Hungary with its sun-kissed slopes and volcanic soil, as well as the unique micro-climate created by the lake that keeps rainfall higher than much of the country and moderates temperatures. Grapes can be seen growing everywhere, from organised vineyards stretching up the hillsides around the towns and villages, to small-holdings and the gardens of the summer and permanent houses. Wine production shares a similar variety of scale, from large labels to individual house-cellar winemaking. Wine is the lubrication of daily life, of informal social gathering and of formal event. Wine festivals form the bedrock of the August national celebrations, a glass of wine in the sun the accompaniment to visits between friends and family. And this leads us back to a sun-kissed terrace on the slopes above Alsóörs and questions springing into an idly wandering mind: What better way to get the conversation flowing than to enjoy a few glasses borrowed from a cool cellar, as the sun beats down on the grapes of the next year’s vintage? What better way of completing the vista of hills, vines and yacht-studded lake than the accompanying sound of crickets and the chink of wine-glasses? Egészségedre!

A Taste of the Cairngorms