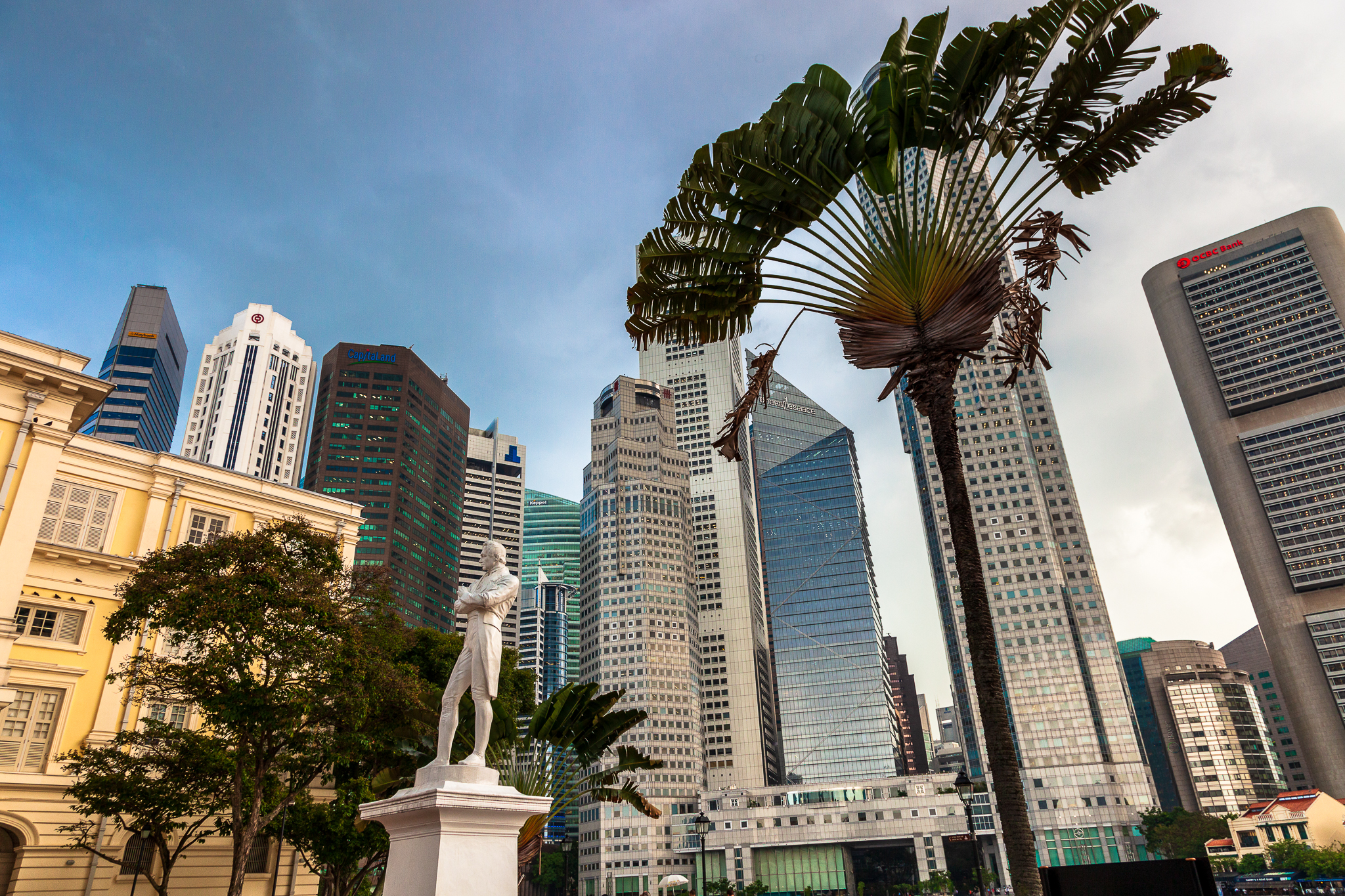 It felt strange to be back in Singapore. Eleven and a half years? In so many ways it felt like yesterday: navigating round the centre felt so easy with its many familiar landmarks. Everything was so familiar, so much was still the same. Here in front of me was the bridge I stood taking photos as dusk turned the financial district from a spiky crown of gleaming glass and steel towers into a mass of lights reflecting in the calm waters of the Singapore River. Here was Boat Quay with its friendly mix of bars and restaurants with its even friendlier mix of locals, ex-pats and tourists, the air filled with the sweet smell of oriental food, with conversations in several of the four official languages of this bustling city state. But most of all, here was the sultry heat of a tropical night, broken only by a gentle, cooling breeze and the smell, oh the smell that once caught on the nostrils always carries me back to evenings such as this in lands near the equator. It is not just the food smells wafting on the breeze, and the smoke of incense sticks drifting lazily out of buildings, the air itself smells sweet, smells… warm. 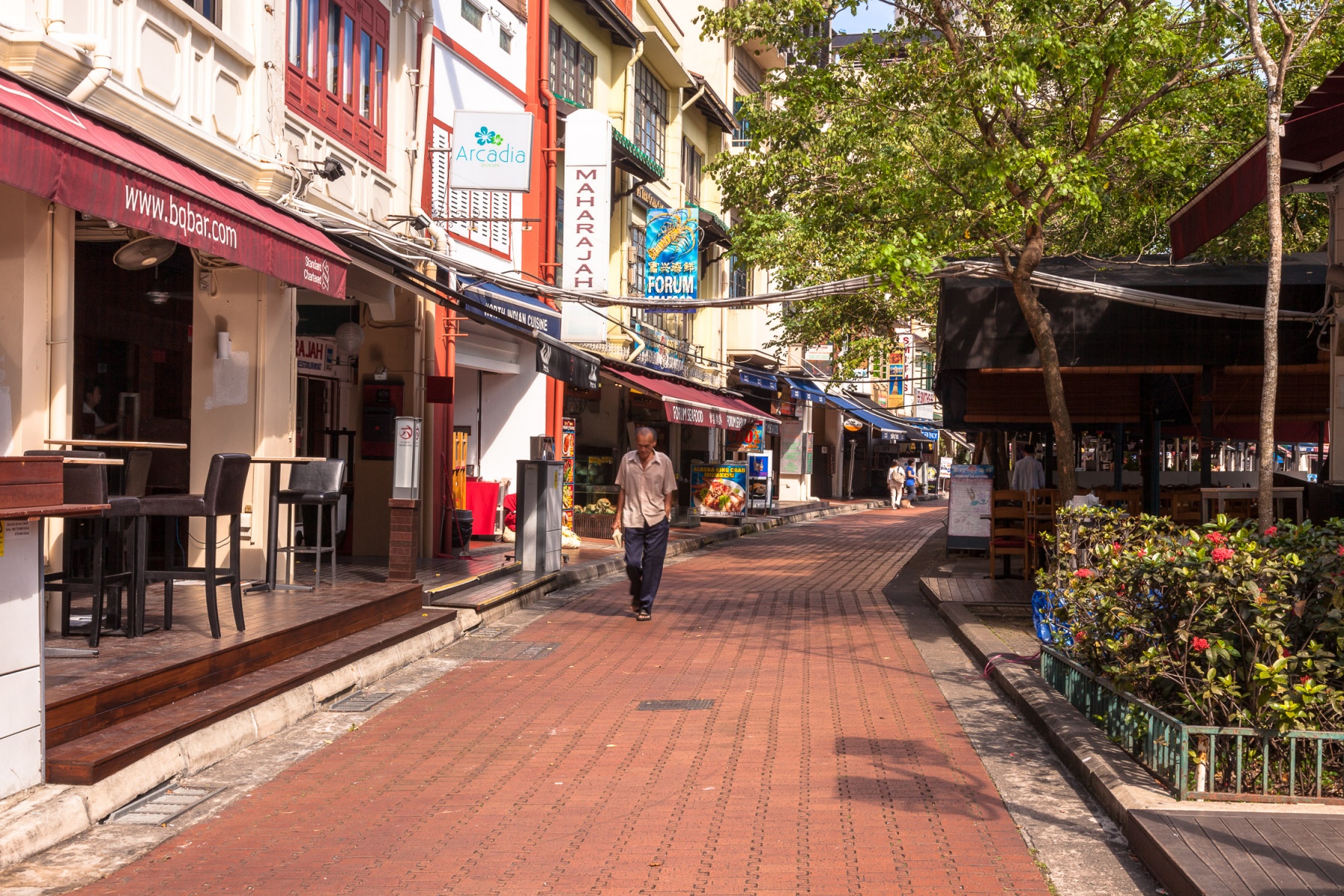 But things have changed in those 11 1/2 years. The names of the restaurants have changed, new towers have sprung up to change that view I watched changing from day to night, but more noticeably, the whole area of Clarke Quay across the river has grown and changed into a a huge nightlife area of more bars and restaurants, pavement cafes and nightclubs. Unlike the gentle, convivial charm of Boat Quay, however, Clarke Quay is loud, raucous almost hedonistic, but in the controlled, regulated way of Singapore. Here, the bars compete with each other to blast out pumping, bass-driven dance music or cover-version live bands, offering themes that mimic drinking cultures from all over the world: Irish pubs side by side with Japanese karaoke bars and American go-go joints, all in streets that shelter under an architecturally iconic roof, in converted shophouses that give the merest hint of Singapore past. The pedestrianised streets are lined with tables and chairs, small squares filled with fountains and gardens illuminated by multi-coloured LED lights. But this is, of course, Singapore. This whole scene is regulated and controlled. What you will not see here, in this den of apparent decadence, is drunken behaviour, litter or dirt. This is the world at night-play, just packaged, and sanitised and safe. 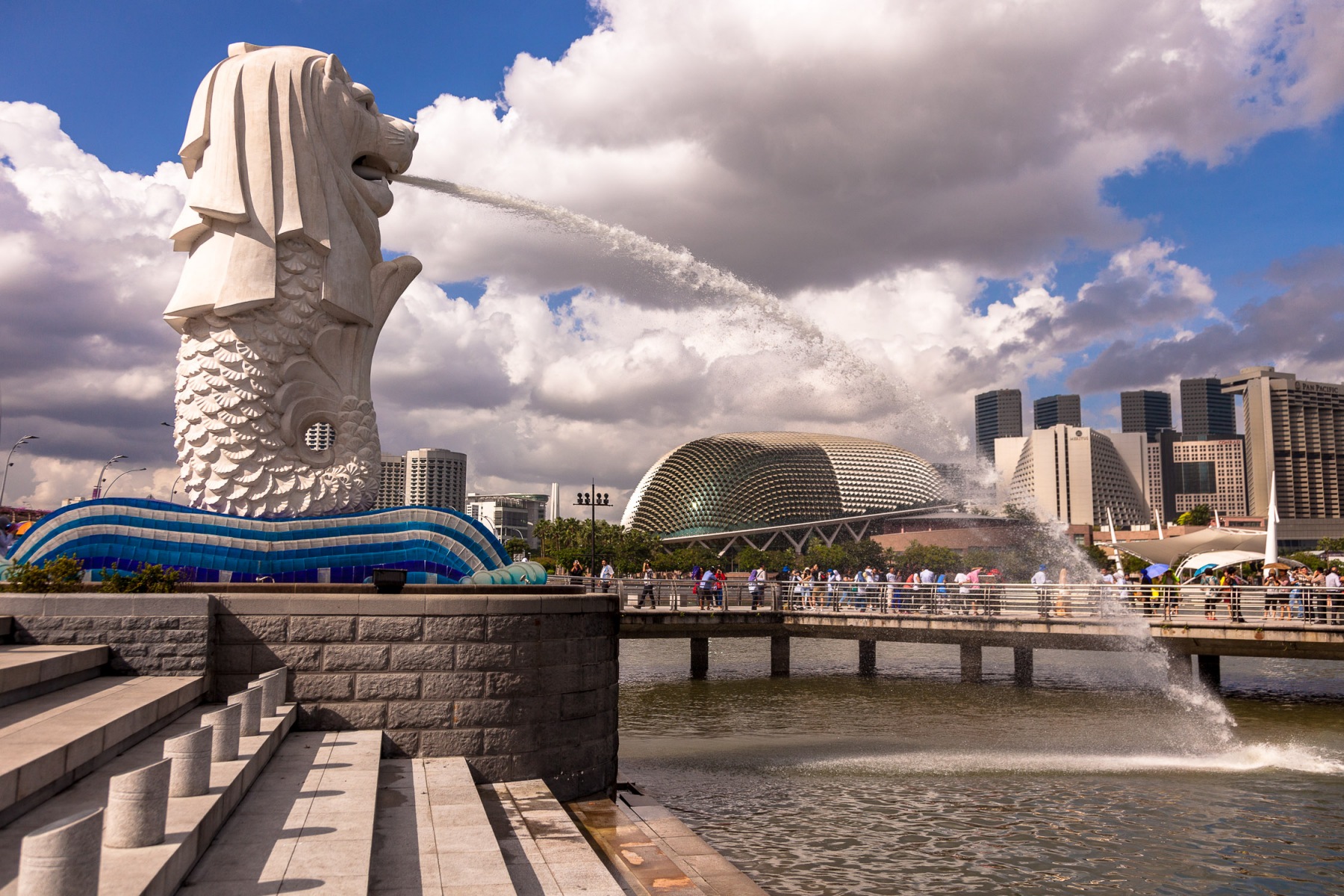 Changes have been made to the waterfront, too. Big changes. The Singapore River no longer drains into the sea just beyond the Fullerton Hotel. Marina Bay, once an inlet from the Straits of Malacca is now a freshwater reservoir, separated from the ocean beyond by a barrage and a couple of new bridges. A few water taxis still ply from here up to Clarke Quay, but most of the boats that travelled the river have gone due to clean water restrictions, leaving the river, the lifeblood of the city as it grew from trading station into bastion of capitalism, feeling empty and somehow sterile, just empty water flowing through concrete channels with no life and no purpose. Even the Merlion, tourist authority contrived symbol of the city, no longer spurts water into the river’s mouth but into the waters of the bay, albeit from a more tourist friendly vantage point. Surrounding Marina Bay, reclaimed land has been developed to expand the city still further and once more change the skyline for ever. The use of this land has been creative, most notably with the building of the new icon of Singapore, the startling henge-like triple towers of the Marina Bay Sands Casino and Hotel. 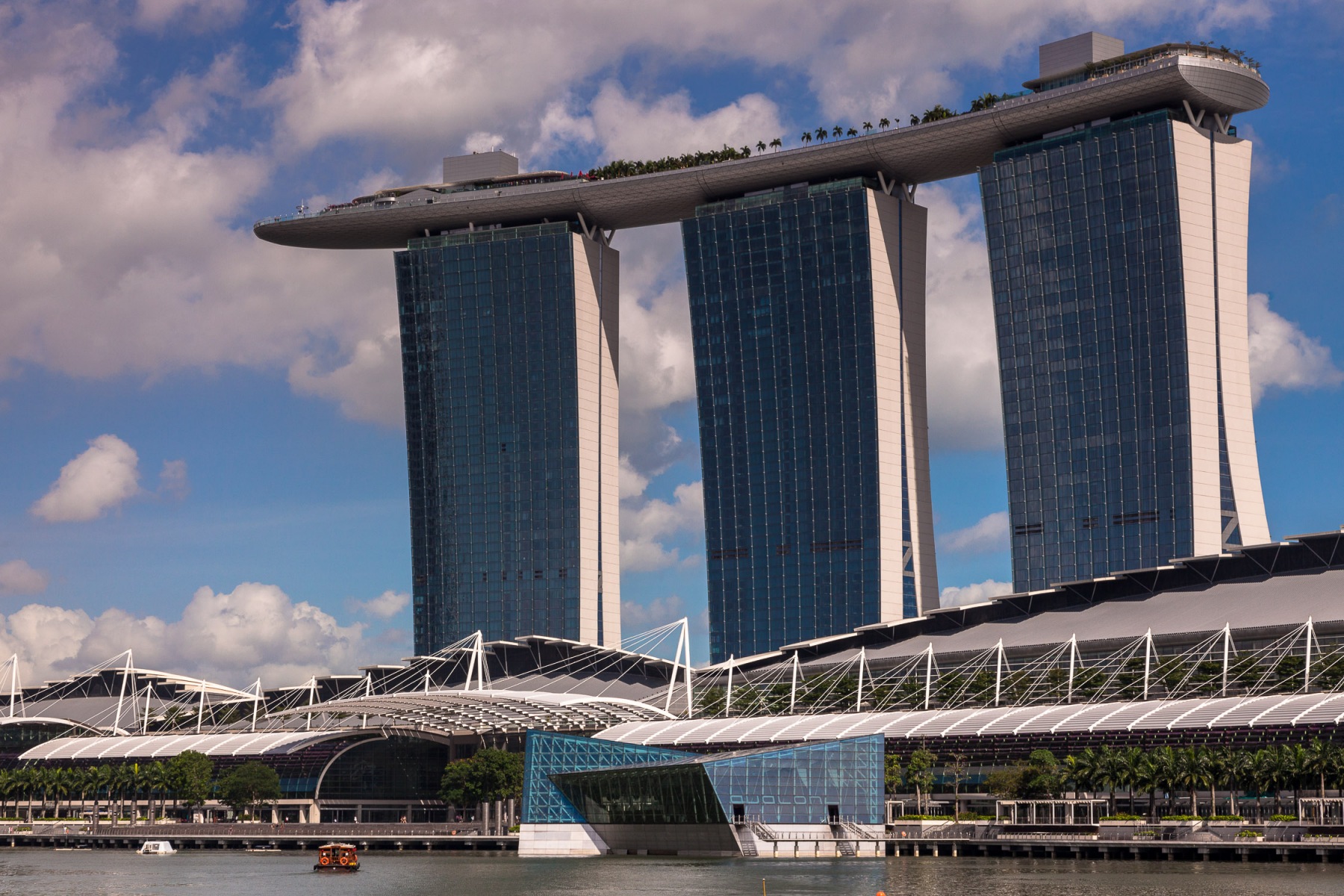 This is a building that would not look out of place in Dubai, at once adventurous and ground-breaking in design, but yet also tacky and symbolic of all of the extravagance and waste that epitomises the worst excesses of capitalism and the harsh dichotomy of modern Asia. Here stands an obnoxiously expensive building where only the winners of capitalism can stay, bang smack in the middle of a region of the world in which searing poverty is still the everyday way of life for the majority. Whilst people struggle to eke out a life on the mine-ridden rough farmland of Cambodia or Laos, rich Westerners and Chinese can swim lazily surrounded by palm trees and cocktail bars on the boat-shaped Skybar lying across the three towers and look out at the gleaming shrines to monetarism and consumerism beyond. In the shadow of the Marina Bay Sands, the opulence continues in the shape of a vast multi-floored shopping mall, containing only the most exclusive of shops peddling their designer brands at designer prices. The irony, of course is that these very products are made in the workshops and factories of Asia roundabout by workers who couldn’t earn enough in a year to afford even the cheapest item on display.

Almost as an antidote to this capitalistic excess, a large part of the reclaimed land of the Marina Bay development has been given over to the Gardens on the Bay. This 101 hectare site bordering the Marina Bay Reservoir was a key part of the masterplan for this area. With only the first phase of the construction completed, the aim of the gardens is to provide the city with a large, green open space to complement the other parks and gardens that make this an already open and leafy city. Anchoring the gardens are two biodomes, housing very different environments and flora to the tropical land around, one Mediterranean, the other the cool, damp conditions of the mountain cloud forest. From these, the carefully created Dragonfly Lake stretches inland, forming a natural barrier between the gardens and the waterfront developments. In the centre of the green space, a collection of different themed gardens show off a wide range of plants surrounding carefully planned landscaped paths and construction. The most striking of these, dead centre of the gardens is the Supertree Grove, a huddle of giant 25-50m tall metal “trees”, some linked by an aerial walkway. 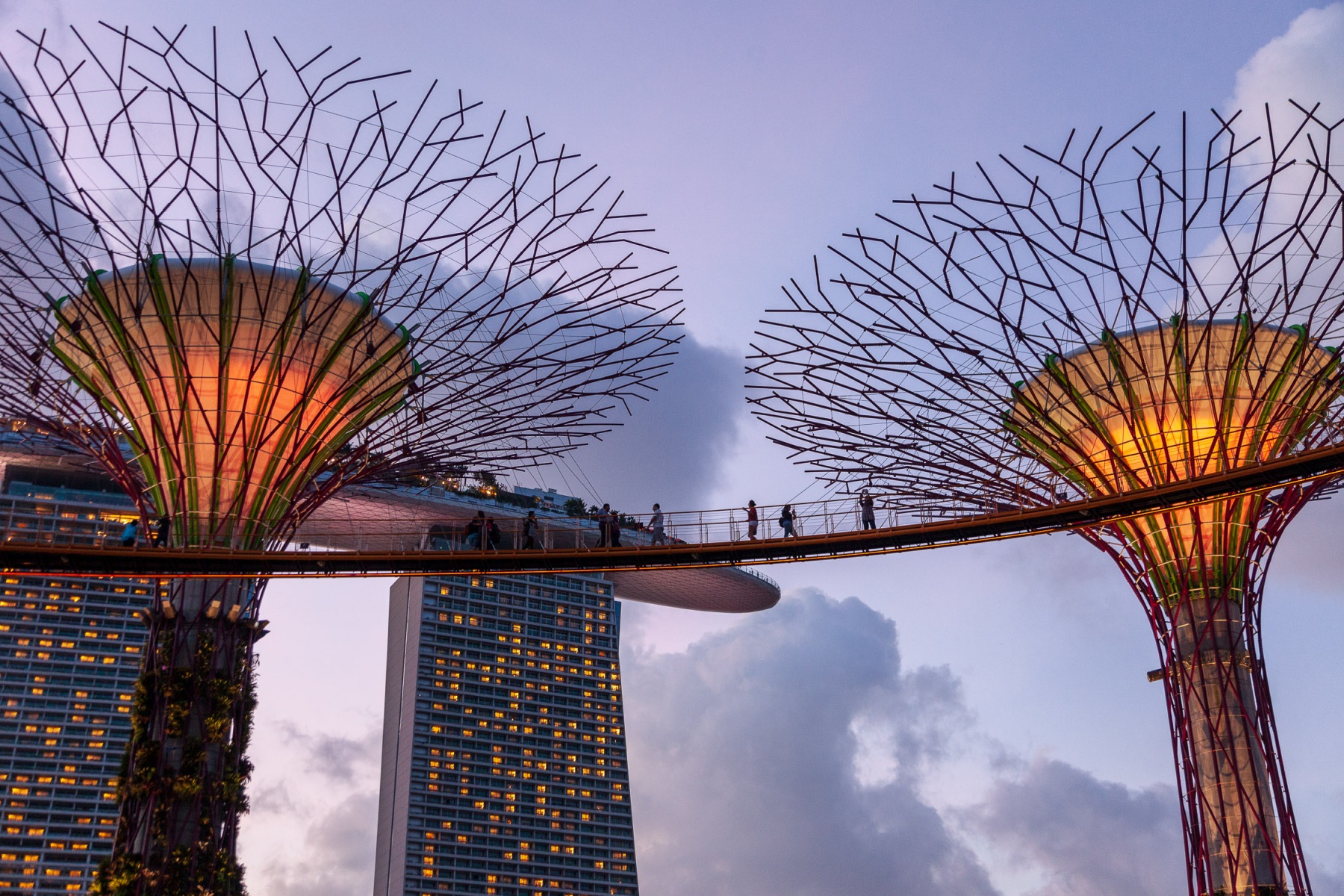 These are more than just giant sculptures. They form vertical planting beds, covered with ferns, orchids and other rainforest plants that bring a tropical humidity to the shade cast by the overhanging “branches”. After dark, these spectacular towers are creatively lit joining the floodlit gardens to provide interest well into the evening. Every element of the gardens has been meticulously planned, from the waterways that bring irrigation to the growing areas, to the carefully laid out walkways and plantings. This helps make them eminently visitor-friendly, but, as in so many areas of Singapore makes it feel sterile. With not a leaf out of place, or a blade of grass poking through the well-surfaced paths, the gardens feel contrived and oxymoronically lifeless. Maybe this is because they are new – the larger part of the themed gardens only opened in 2012, but maybe, once again, they are simply too well planned, too ordered, too contrived. 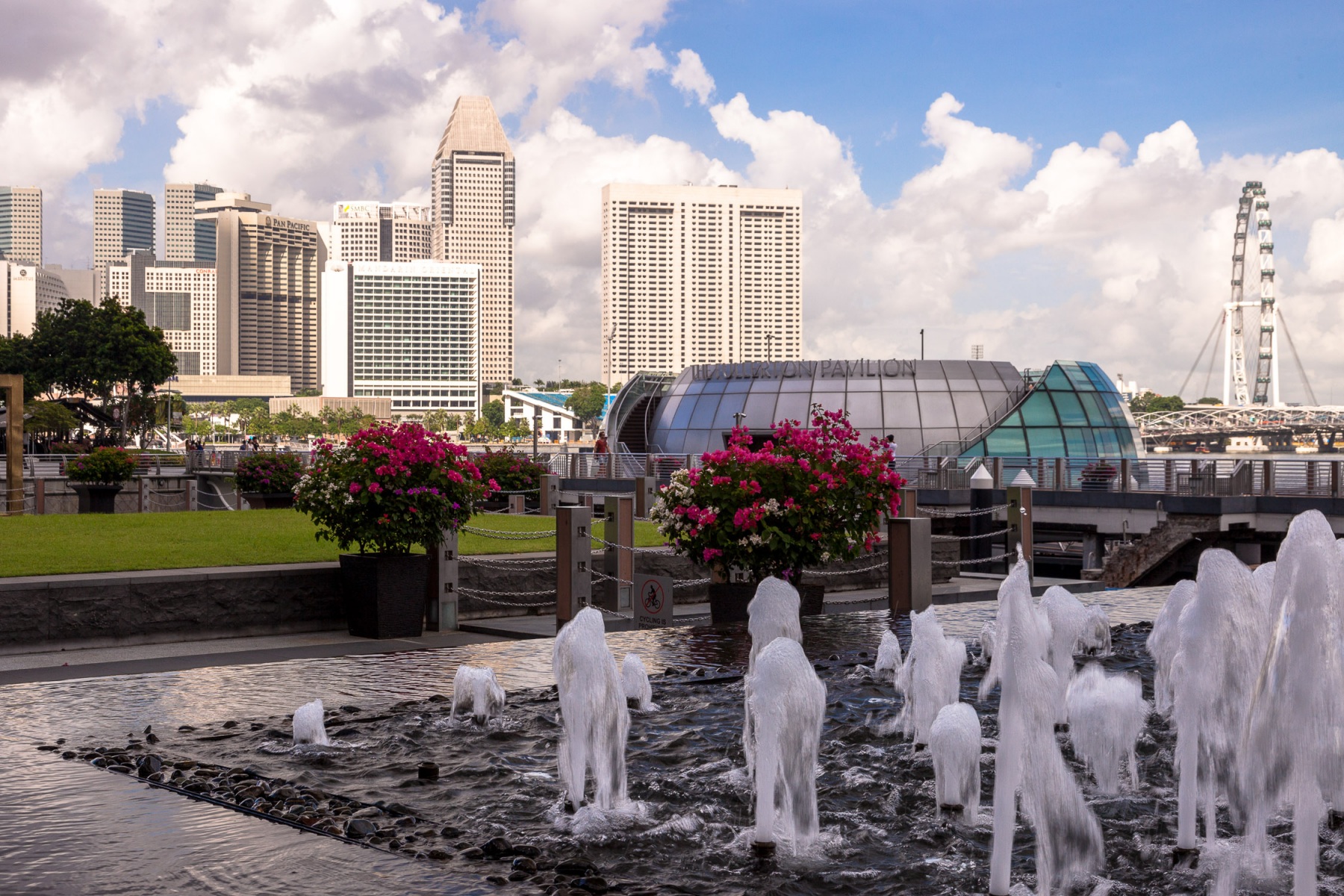 As well as creative, the new waterfront developments have also been destructive, cutting the city centre off from the sea entirely. The once bustling Clifford Pier, home to ferries to offshore islands and out to Indonesia, now landlocked and without purpose, has been converted into the lobby of yet another high class hotel and the busy Customs House and wharfs on Collier Quay that surrounded it, into glitzy restaurants and gleaming office and apartment buildings. Once again, an area that once bustled with the comings and goings of humanity with all its imperfections has been cleansed, sanitised and stripped of life, any grubbiness and imperfections replaced by shining glass and steel and matching trees in matching wooden planters. Singapore city centre has lost its connection with the sea that brought about its existence in the first place, and in doing so has not just turned its back on its history, but lost a large chunk of its soul at the same time. The grandeur and inspiration of the Singapore skyline is undeniable, but shouldn’t a successful city have as much pride in its past as in its future?

The Soul of Singapore?

A Taste of the Cairngorms