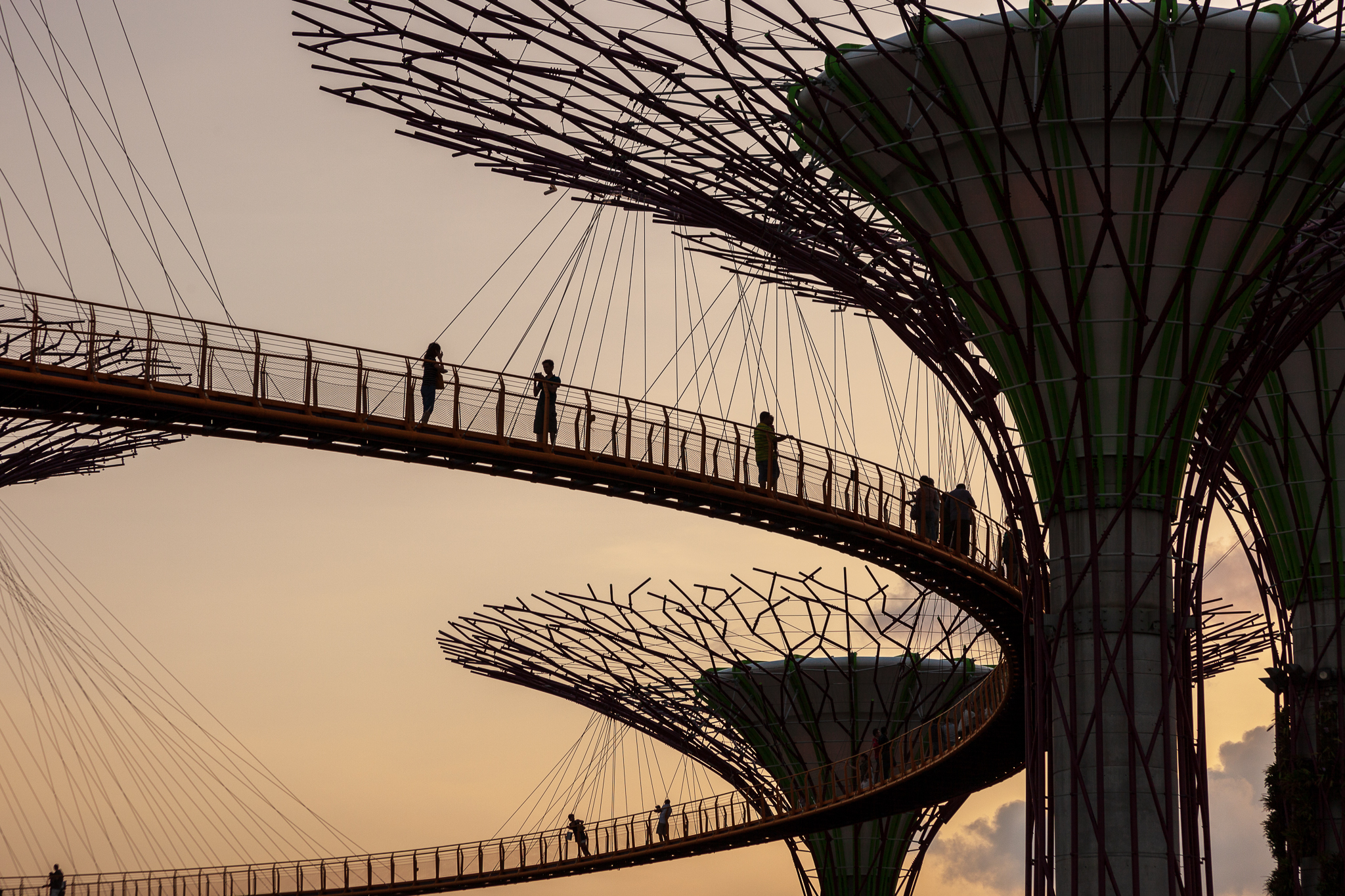 From after independence through to the turn of the millenium, nothing was going to stand in the way of progress in Singapore. This was a city with a vision, with a singular purpose and a lofty aim. Singapore, always a trading nation, always a crossroads of the world was to build on this and become a new bastion of capitalism, a new economic powerhouse to rival New York, London and later, Hong Kong. It saw a place for itself in the world, an upstart, no holds barred, brutally brash city state which favoured innovation over steadiness, enthusiasm over reservedness and most importantly progress over heritage. To indelibly stamp its authority on the new world order, Singapore needed to modernise, to grow and to provide fertile ground for the new rulers of the world, the corporations, to set up shop in the latest, shiny, iconic buildings. This kind of progress was happening the world over, but with checks and bounds. In Europe certainly and even, to a much lesser extent, America, there could not be redevelopment at any cost. Protests soon grewin these places against the wholesale destruction of the past to build first the brutalist concrete and then the modernist glass and steel of progress’ towering architecture. The difference in Singapore was that this was, to all intents and purposes, an autocratic  regime, a society so tied down in law and regulations that the government pretty much owned and controlled every facet of life for the multicultural people of this island. This is why Singapore is not South East Asia in anything other than an accident of geography: Asia is the chaotic maelstrom of vast, overwhelming humanity. Singapore is order, control, social repression personified. What this total control of society meant was that the government had a vision and the people had to pretty much accept that. So when the proposals came to flatten whole areas of the historic city for regeneration in the bland materials of progress, there was very little to stand in their way. 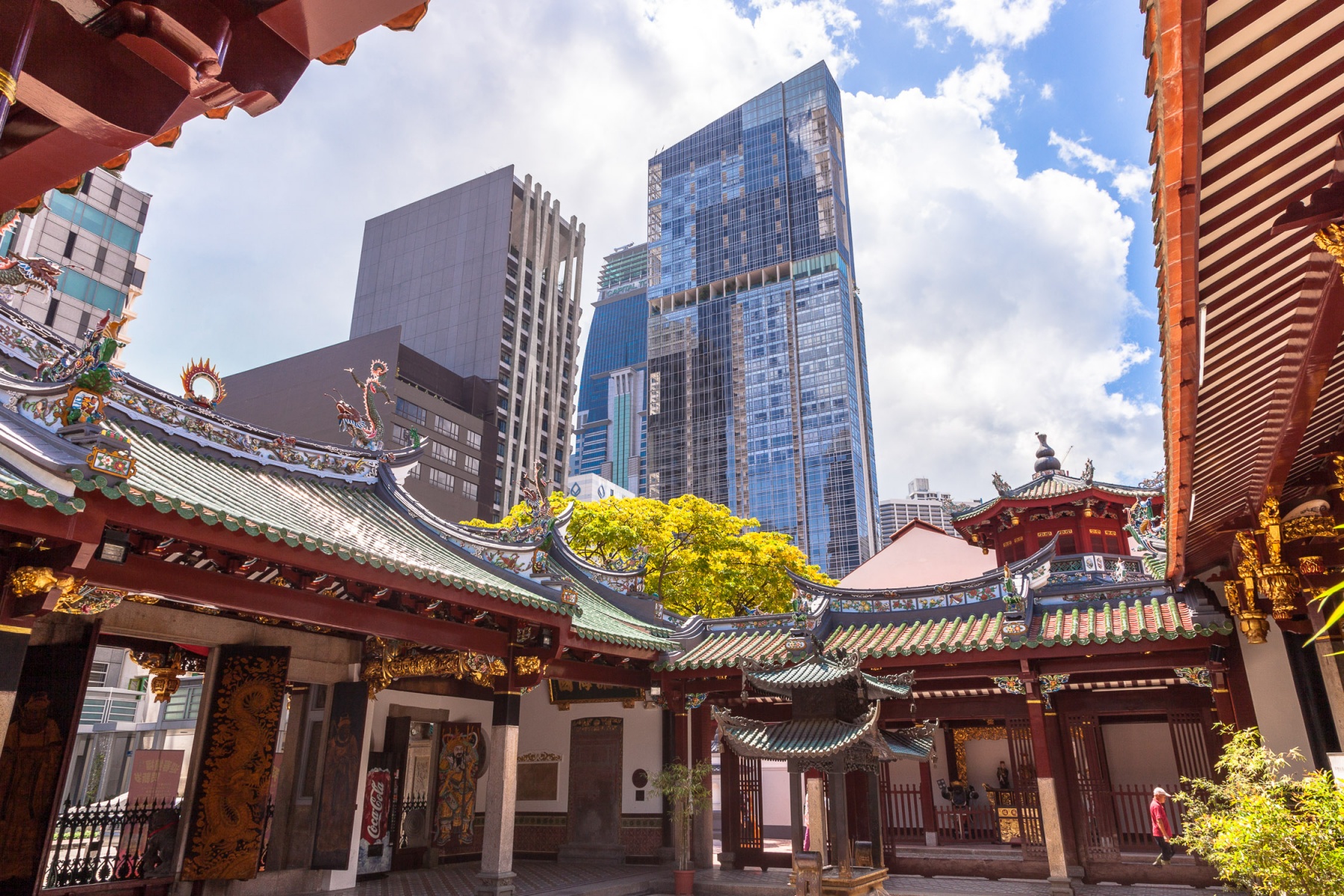 Nowhere was this more pointedly felt than in Chinatown. This was the historic heart of the city, the area bordering the original coastline where the Singapore River met the sea. Here, the first trading posts were put up tempting traders and entrepreneurs from Southern China to flock to the area to take advantage of the new opportunities. When the British arrived, the Chinese traders were already established and had built the foundations of a very successful mercantile society. The British merely took advantage of this, nurtured it and profited from it. The Chinatown area grew exponentially, anarchically, into a jumble of streets full of shophouses, hawkers markets and workshops. Humanity was packed in here and the conditions were often less than savoury. In the vision for the new, ordered, successful state, this kind of chaos was not acceptable and the whole area was earmarked for “regeneration”. With no checks and bounds and no ear for the voices of protest, this regeneration was brutal: whole sections of the district were razed, replacing the historic shophouses with their attendent neighbourhood and clan culture with the cold, soulless concrete of municipal housing. municipal marketplaces and municipal cultural centres. The life, the heart and the soul were ripped out of this once most colourful and vibrant of quarters. For a while it looked as if the old spirit of Chinatown would be confined to history. Thankfully, as Singapore headed into the 21st Century, there came a change of heart, or at least a change of vision. Despite the continued desire to expand and regenerate the city, the government has now realised that this cannot happen at any cost, that there is a value in heritage and not just a quick buck in progress and redevelopment. The cynic would argue that it was the realisation of the value of the tourist dollar in the wake of the Asian economic crisis of the late 90s that created this change of heart, but perhaps it really was a belated sense of the historic that led to Singapore’s heritage districts to be  positively advertised, touted, impressed on travellers and locals alike rather than hidden away, decried as an embarassment ripe for replacement. Though further renovated and cleaned up  since my last visit, at least the destruction of Chinatown’s traditional shophouses has apparently stopped. 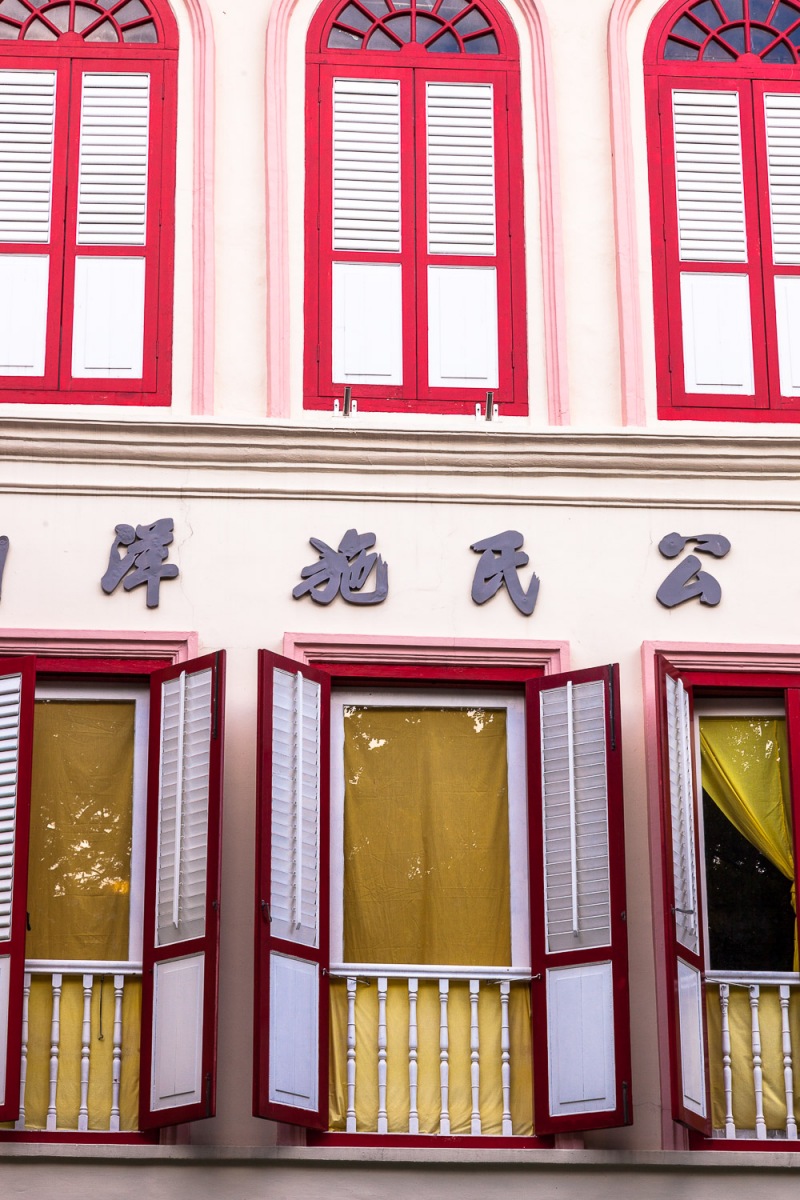 There is once more a vibrance to the district. It is in this area that the city has the conviction again to bare its soul to the world, albeit a sanitised one in which the decay of age has been hidden by a lick of bright paint. It is there as soon as you step above ground from the Chinatown MRT station and into a world of bustle, noise and the near chaos of concentrated humanity that must send a shiver down the spine of the city’s all powerful Department for Orderliness and Organisation. It is there in busy streets broken by small secluded temples that provide an escape from the noise and heat of the streets. It is there in the throngs in the community market bustling around the clothing and fabric stalls on the main floor and the fascinating wet market in the basement. If you ignore the concrete blandness of the building, this is the place to come if you want to experience a hint of the way of everyday life for Singapore Chinese. Here people queue patiently to bargain for everyday foodstuffs from fruit and vegetables to the essential seafood, fish, and more distasteful to Western sensitivities, frogs. These latter sit in cage after cage in one corner of the market, awaiting their new owner, and eventually, their fate. Not many tourists stroll around here, but those that do are rewarded. 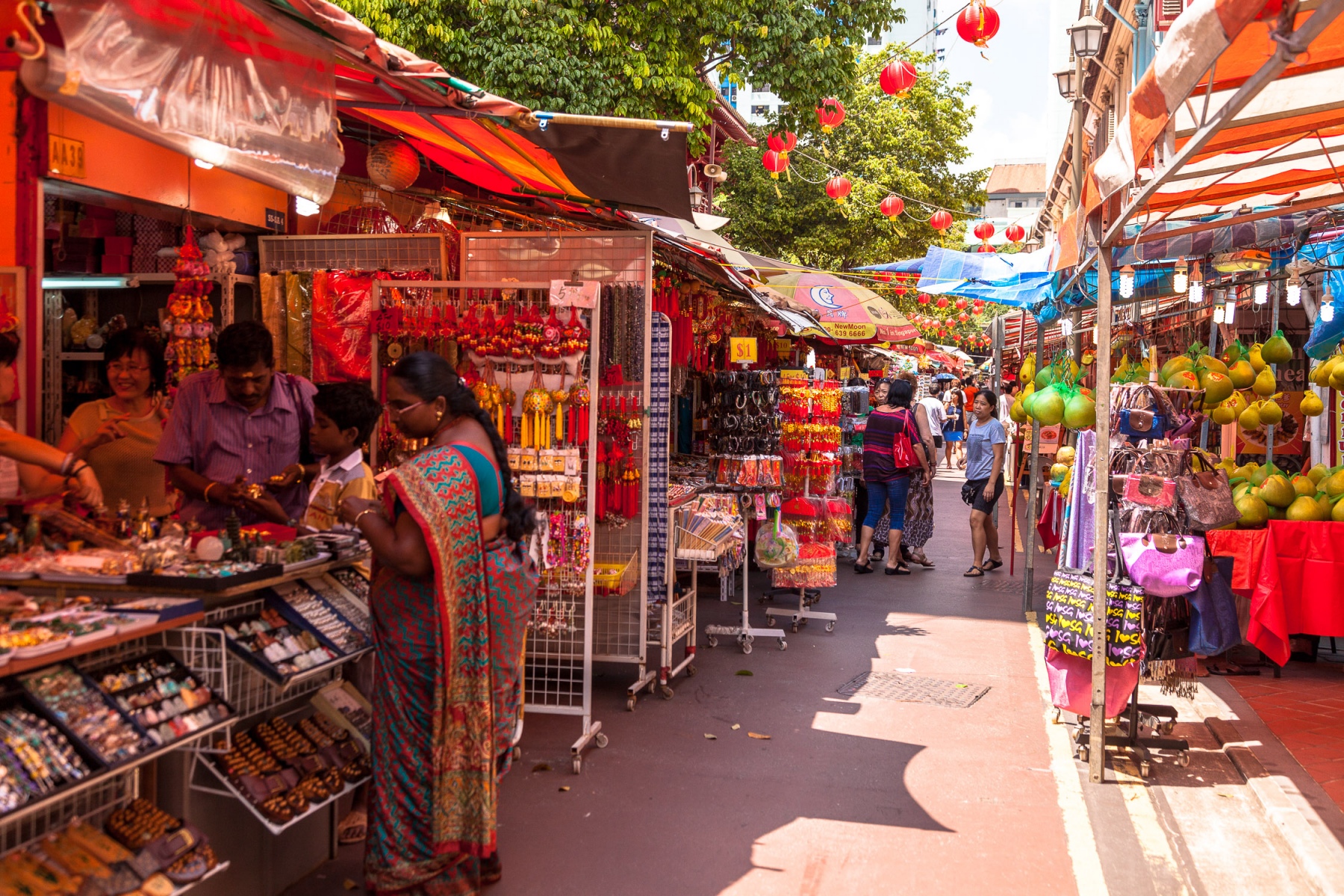 Where most of the tourists are, is joining the teeming numbers of Singaporeans in the busy narrow streets containing the night market. Despite the name, these stalls are open all day and late into the night, though some do fall by the wayside as time goes on. For our visit, these stalls were a delight of red and gold, selling brightly coloured banners, hanging decorations and other nicknacks for the upcoming Chinese New Year. Many of the stalls were also happily playing what can only be called Chinese Cutesy Pop Music: a disturbing blend of western pop beat and extremely sugary Chinese vocals, something you can imagine being sung by the girl-band winners of Chinese Pop Idol. Among the stalls catering for the local’s celebratory requirements, there were still plenty of stalls to interest the tourist, whether it be a tacky souvenir, a t-shirt or a glimpse (and smell) of the local delicacy, the durian fruit, just one sniff of which is enough to make you question the sanity of the people tucking into them at street side tables and fully understand why taking them onto the metro is to risk a hefty fine. But noxious fruit aside, you can’t help but be tempted to browse and teased into buying, and you certainly can’t help but be sucked in by the colour, anarchy and bustling humanity of the place. Close your eyes for just a second, and take only the sensory inputs of your ears and nose, and you’ll be transported far from the order of Singapore and into a bustling market in southern China. 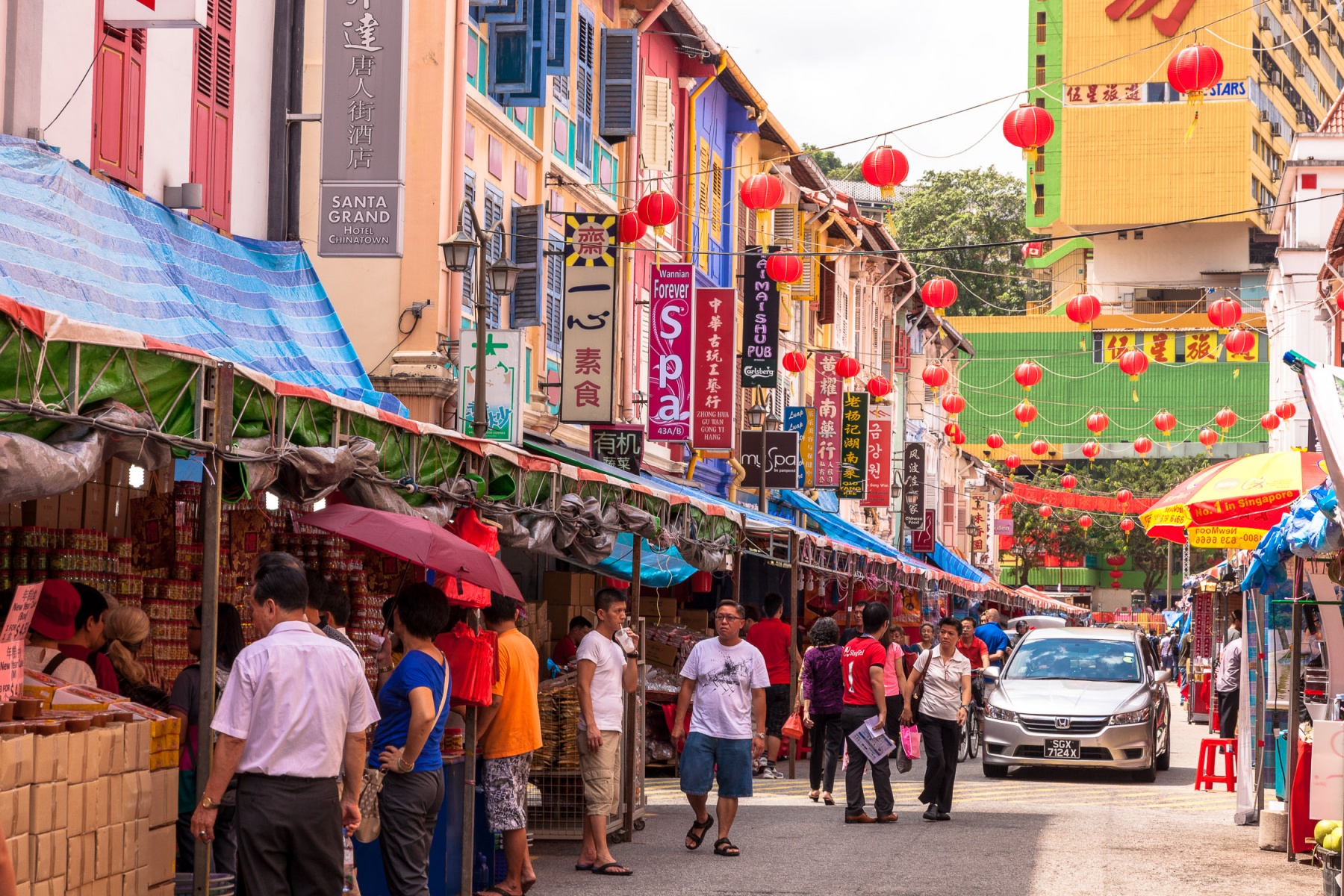 The highlight for many of a visit to Chinatown, however, is the food. Restaurants are dotted along most of the streets in the area, ranging from the basic to the glitzy and icily air-conditioned. Notable places to go, though, and where the cognoscenti head straight away, are Smith Street and the Maxwell Road Hawker Centre. Smith Street is not easy to miss. For a start there are the brown signs on South Bridge Street pointing out the “Chinese Food Street”, but easier is to follow your nose as the sweet and sour smell of Chinese cooking drifts lazily around the area, carried by the gentle breeze through the warm, humid air.  The brown sign does not deceive in its message. This truly is a street dedicated to Chinese Food, in particularly traditional Hokkien  cuisine based on fish and seafood, though wider Chinese tastes, such as the ubiquitous Hainanese Chicken Rice, are catered for. The shophouses that line the road contain restaurants or more informal cafes, whilst the pavement and street in front are full of hawker carts and tables belonging to the restaurant standing behind. Here you can happily surfeit on curry fish head stew, shark fin soup, frog curry or whatever else takes your fancy from a diverse range of menus, all at what are bargain prices for this expensive city.

Cheaper still, but with even more choice is the Maxwell Road hawker centre a short stroll from Tanjong Pagar MRT stop, one of the original of such places in Singapore. The hawker centre’s origins lie in the hawker pushcarts that used to gather together at strategic points throughout the city and sell their freshly cooked food to passers by. These days the process is more formalised and regulated in true Singapore style. The centres are purpose built structures, under cover and with toilet facilities. The hawker carts are now permanent, gathered together in several rows under bright fluorescent lights. What has not changed is that these carts are still owned and run by families and individuals who ply their wares from before lunchtime until late at night, providing excellent cooked to order food to the hungry people of the city. And this truly is where the locals come to eat: the range is diverse, the food is excellent and the atmosphere charged with conversation. The food is also cheap. A few dollars will buy you a large plate of chicken rice or fish stew, S$10 will buy you a feast, and where better to mix and maybe strike up a conversation with Singaporeans than where they pander to their national obsession: good food. Hawker centres are dotted throughout the city and in every municipal housing complex, but the Maxwell Road centre, with its handy Chinatown location comes highly recommended. If you are looking for soul food in the otherwise soul-challenged city of Singapore, then make a beeline for the newly rejuvenated Chinatown. Yes, it is sanitised, yes it is almost Disneyesque thanks to the lurid colours of the renovations and redecorations, but here the humanity at the core of this multicultural society once more has the self-confidence to put itself on display, to show off its heritage, its culture, its soul.

Balaton – History, Culture and Wine beside the Hungarian Sea